A Tejano Knight:
The Quest of Don Juan Seguin 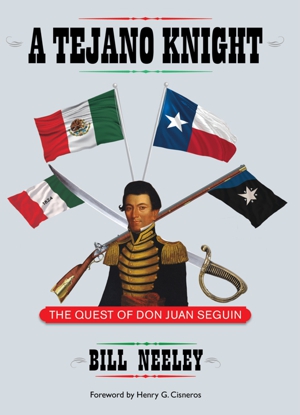 A Tejano Knight:
The Quest of Don Juan Seguin

Juan Seguin grew up in San Antonio, distinguished himself in the war for Texas independence, and served as a Texas Senator and mayor of San Antonio in the Republic of Texas. Yet he was forced to resign, flee to Mexico, and fight for Santa Anna. What happened to this "Tejano knight"? Read more.

Born in San Antonio, Texas under the Spanish flag, Juan Nepomuceno Seguin grew up on the perilous frontier of Hispanic America. As a teenager, he observed the Comanche attacks on the little pueblo on the banks of the San Antonio River, and the scorched earth rampage of Spanish soldiers in destroying those who sought independence from Spain. After the carnage of that revolution, another one soon followed as Texas fought for independence from Mexico. As a young adult, Juan Seguin sided with Anglo-American colonizer Stephen F Austin and distinguished himself in the Battle of San Jacinto against Mexican dictator Antonio López de Santa Anna. Seguin was promoted from Captain to Lt Colonel and placed in charge by the Texas authorities of their forces at San Antonio.

In 1838 Juan Seguin was elected to the Senate in the new Republic of Texas, followed by a stint as mayor of San Antonio. In 1841 a Mexican general visiting San Antonio spread the rumor that Seguin was a secret agent of the Mexican government. Though innocent of the charge, Seguin received death threats from newly arrived Americans to San Antonio who resented the presence of a Texas-Mexican (Tejano) mayor and forced Seguin to resign his position and flee to Mexico, where he was arrested and forced to fight under the command of Santa Anna against his former comrades-in-arms. He later fought for Mexico in the U.S.–Mexican war and distinguished himself in battle.

After the war, Seguin returned to Texas and lived on the ranch of his father Erasmo. In an attempt to clear his name, Juan wrote his memoirs. He was elected Justice of the Peace for two terms and later became judge of nearby Wilson County.

In 1867, after the death of his father, Seguin sold his assets in Texas and moved to the Mexican border town of Nuevo Laredo where he died and was buried in 1890. His remains were later moved to Seguin, Texas, a town named for him after his heroics at San Jacinto. The gesture of the citizens of Seguin to honor the Tejano knight's memory with reburial in Seguin fulfilled his quest for all Texans to live peacefully in a democratic society.

"For far too long, the role of the Seguins and other prominent Tejano families in the Lone Star State's revolutionary decades had been overlooked in its quest for independence and the subsequent addition of Texas to the U.S.A. But Bill Neeley effectively fills that void in the saga of Erasmo and Juan Seguin." — Dr Hugh A. Anderson, Texas Tech University

The Last Comanche Chief:
The Life and Times of Quanah Parker 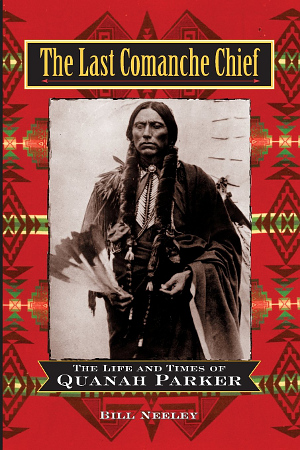 The Last Comanche Chief:
The Life and Times of Quanah Parker

Son of Chief Peta Nocona and a captive girl, Cynthia Ann Parker, Quanah fought until it was no longer possible to live the life of the free plains Comanche. Realistic and foresighted, Quanah then led his people to the reservation. Read more.

Based on years of research and numerous unpublished sources, this is a definitive biography of a legendary Native American chief who played a significant role in U.S. history. Presents a riveting account of Quanah Parker's struggle to reconcile two worlds and two ways of life. Includes an unflinching chronicle of the last brutal wars between the Comanches and Texans on the Southern Plains.

After making peace, Parker became an entrepreneur and rancher, as well as a peace leader of his tribe. Many of his former foes became good friends, including General Ranald McKenzie, whom he bested in 1871, and who led the final campaign against the Comanches in 1874. Later-day friends included Theodore Roosevelt.

"The special merits of Neeley's work include its reliance on primary sources and illuminating descriptions of interactions among Southern Plains people, Native and white." — Library Journal

"This is a fine portrait of the legendary chief and an illuminating glimpse into the history of the American West." — Publishers Weekly

"A vivid, eyewitness account of life for settlers and Native Americans in those violent and difficult times." — Christian Science Monitor

Bill Neeley is a teacher and independent historian who has dedicated years to archival research. Featured prominently in the segment on the great Comanche chief Quanah Parker in the A&E television series The Real West, he is the author of the acclaimed book The Last Comanche Chief: The Life and Times of Quanah Parker. His latest book, A Tejano Knight:The Quest of Don Juan Seguin chronicles the tumultuous life of a Tejano in revolutionary Texas. He has also written Quanah Parker and His People, and a novel, Rodeo Clown. Mr. Neeley lives in Lawton, Oklahoma.